Boys and I at Phnom Sampeau

We’ve been living in Battambang (BTB) for close to 7 months. We’ve had our share of adventure, adjustments and eye openers. It’s been a real ride in many ways, a life changer.

Last weekend we visited hot spot Phnom Sampeau, a golden pagoda on a mountain (hill). It is very flat terrain around BTB and craving a view we piled on our family moto. Perched high on limestone cliffs, monks share the space with a huge bat colony that draws loads of tourists at dusk, where they proceed to pee all over their cameras as they fly overhead.

Beau Beau. Watch out monkey, this kid may attack!

It’s been a time for reflection. Battambang with kids isn’t straightforward. The larger cities, PP (Phnom Penh) and Tourist Mecca, Siem Reap have more schooling options and recreational activities. BTB only recently got its first playground. We weren’t expecting a metropolis and this is part of the appeal. But it does make for some additional challenges, primarily connecting with other families. We are the first family to work for our NGO.

Quinn has gone to 3 different schools. First, French school which was like trying to speak Martian after recently landing on the Moon. Then he began Phare Ponleu Selpak School where they draw “a solid brick with a cup on top” for two hours Quinn tells me; and learn to juggle, handstands and rolly pollies. Lessons all in Khmer, Quinn the only foreigner, he has grown in so many subtle ways. Confident in new situations yet also a lot of time in his head. Just like all the other kids, scabs money off his parents to buy fried dough ‘bones’ in break time and plays battle cards.

With no maths, home readers or science in the curriculum, I’ve taken on the role of supplementary educator. Filling in reading gaps amidst emotional outbursts (his…and sometimes mine) and getting him to count the change from shopping, does this account for half a year of school?

The nightly (who am I kidding…weekly) pantomime looks something like this: literacy books are red flags, Quinn the resistant Bull and I, the flailing matador spinning in circles. An enormous sombrero off to homeschooling parents out there.

How the heck do you do it?

We’ve all had moments of homesickness, a flickering moth near a flame that doesn’t last long. Sometimes you miss things being easy, the cuppa at a friend’s place where you can let it all hang out while kids play raucously without fear of oncoming motos or disturbing tourists’ peace. To go a week without explosive poos and parasitic torch checks (yup, you know the itchy bum syndrome). But we know life remains barely changed and friends there with welcoming arms.

However Quinn has consistently expressed longings for home. He’ll often speak of kids in his old class (including the boy who’s got booby pictures of chicks on motorbikes). Out of nowhere he will turn quietly to me and whisper ‘I want to go home mum’. And I listen, rub his chest and say ‘I know my darling’.

You can never predict how change is going to affect your kids. Unfortunately after bonding with two English lads (Trapped in an Elevator) they left suddenly 2 months later. The family went on reconnaissance mission to Malaysia and never came back. Their sons refused to get on the plane, according to them Battambang was too hard. No one has filled their place as most families go elsewhere for education as kids get older.

No stone left unturned: I took the boys to the local Church as I’d heard whispers of some homeschooling Christian families. In a hall decked with plastic chairs we were ushered in by a lovely American lady who had warned me outside ‘you know it’s Christian organisation’.  Not seated for long, we were all up clapping and hip swaying to a band with a male Khmer singer.

I’d already scanned the crowd and noticed a woman with 3 boys: one tall gangly one with a crop of red hair looked around 8. Cotton balls were handed out. Quinn laughed loudly when the teacher asked if anyone knew what a sheep was? He couldn’t believe anyone wouldn’t.

We’re from Australia, I say

The teacher explained if anyone memorised the psalm for next week, a prize was on offer. Quinn, a known haggler went in for the kill,

Not that impressed by coloured pencils and erasers, he didn’t do his homework. By the end of class, the tall redhead, a self confessed ‘weirdo’ (that put me at ease cos we are a bit left of centre) was hanging off Quinn chasing him around, pestering his mother for a play date. He was another socially deprived kid like ours. We swapped numbers but no play date was firmed up. With the best intentions to return, we haven’t been back.

Beau has had a smoother ride as there are many more English speaking kids at preschool. His best buddy, Max is French and they only share a few common words between them. It doesn’t seem to matter. They’re both cheeky.

So now as another school year looms Oz side, we’ve had to make some tough decisions. As Quinn wishes he could read and wonders why he can’t and with too much thinking time, he needs structure and stability. Tim and I came here to share new experiences with our boys. To ultimately show them how privileged we are with our white goods, typhoid- free water and flushing loo that doesn’t dump its contents in the irrigation ditch outside your house. 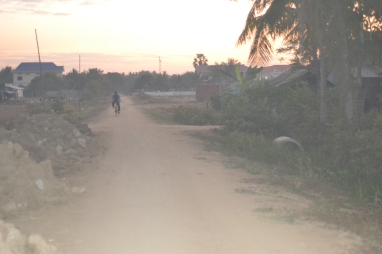 Pipes and dirt piles in our street

The neighbourhood kids along with Quinn and Beau run along big concrete pipes that were dropped outside months ago but not yet connected. It’s a myriad of buffalo, cow and human waste in stagnant water as it haven’t rained for months. Quinn asked is that where our poo goes the other day. He now wants to be an engineer when he grows up to stop people from getting sick. His Uncle works at a sewerage plant in Oz, I’m sure they’ll have stuff to talk about.

So D-ecision Day is upon us. I will return to Australia with the boys. Luckily, I can manage my project remotely. Thank You Internet. Tim is going to stay on the ground to set up a recording studio and be techie for The School in the Cloud. I will return to consult on the project near the end of our contract swapping with Daddy. To be honest, we will get a lot more NGO work done this way.

This is not the end Cambodia. Our love is firmly established and life is long. I’ve cried some tears but my heart grows quiet when I see Quinn relax upon hearing the news. Knowing the hard but best choice has been made for now. 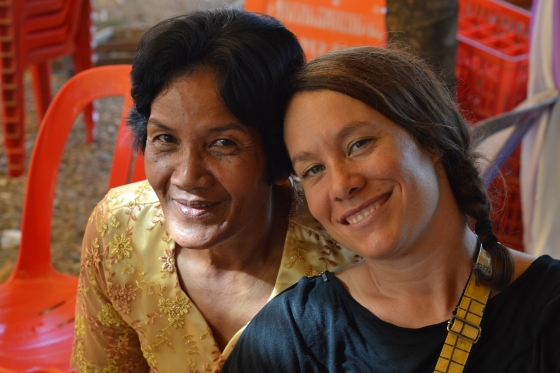 Om (Aunty) and I. No common words but we held hands and just sat together